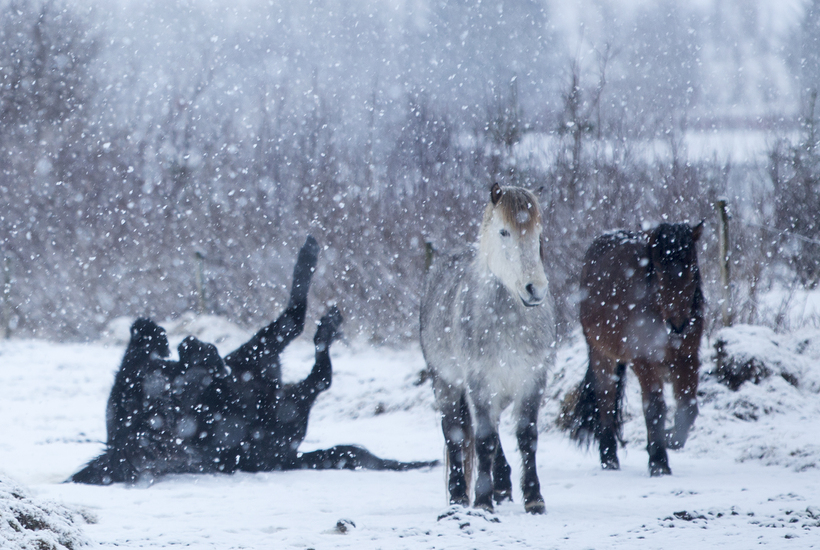 The snow was falling outside in April. It was a rare event. There had never been a fall in this season in my life until now. I was in my room watching some explicit cum primetime show meant for ‘family’ [no pun intended].I wasn’t a workaholic, laziness topped the charts in my bad habits.It was an unusual, extraordinary day, not only because of the eccentric climate but of the reason that i was getting tired of watching the idiot box, something I was feeling for the first time in my record of T.V  attendance.
Somehow I began to think,i began to appreciate the wonderful visuals created by ALLAH that day. I was quite enjoying my first encounter with natures beauty, something i missed before,the reason being gizmos and gadgets.I got up in order to enhance my view. Almost half a km from the window,i saw three horses. Among the three one was white, the other two being brown, with the white one defeating both his two peers in a race of looks miserably.
As i mentioned earlier, this particular day was quite extraordinary because of the drastic changes in climate and in my emotions so there were quite many surprises waiting to be unwrapped. The Brown twins were busy in their meal with their heads down. The white lad was looking up,high in the sky. It looked like he was feeling the ‘feel ‘ of snow falling on his head. I was getting contained in this wonderful sight but my mother invaded my privacy and entered my room. An old woman who had been ill for a handsome span of time had died just while I was in my thoughts about the three horses.
My mother ordered me to go with the funeral. I wasn’t so obedient but this time I instantly said okay as the three horses had gone miles away from my vision.
The family was struck with unfortunate sorrow. I wasn’t so emotional maybe because of my 24 hours exposure with melodrama. In the while, my mind was constantly recapping about the horses and trying to figure out as to why the white horse was looking up.
Meanwhile my eyes randomly saw a little boy ,about 13 crying mercilessly while her old grandmother was being buried. I began to compare the little boy with myself. I constantly stared at the boy’s face thinking how innocent his face was like that of his emotions and how reel life enacted and shown to me have transformed me into a flamboyant beast.
Getting over from this self-realization my eyes encountered upon the plate on which name, d.o.b and death date of the old woman were written. Besides this, a sentence was written on the plate in Arabic. I without shame asked a Muslim cleric standing right beside me about the meaning of the very sentence.”Every soul shall taste death” was his response with his eyes not being too cruel and not too shallow for this occasionally stupid question of mine.
I never pondered minutely about anything until this very day. While I was in my way to home I met the brown brothers running like hell. If I had stopped their way that time, they would have crumbled me down. They were running like they were competing with each other in a marathon.
I returned home, after having dinner I began to recap all these emotionally charged episodes. I became asleep only by ‘thinking’ that night. It was another extraordinary thing that happened in those 24 hours. My eyes had made a routine of not closing their shutters before watching their favorite shows until midnight.
I woke up early the next morning but not voluntarily. While rubbing my dreamy eyes, the thought of the handsome white horse came to my mind. I recollected the ‘scene’ of the running brown athletes heading to their ‘unknown’ destination without their white partner. This made me restless even after having such a delightful sleep after such a long time.I went out to find the whereabouts of the white hunk. Soon i saw his partners having their breakfast with heads of both, of course, down enjoying their meal. I tried to look here and there for the ‘third one’ but all in vain…….
At last, what I guess was the feeling of pity felt by these emotionless creatures for me, they stared at me for about a minute and then looked up like their missing partner. I don’t know how and why but i heard someone whose voice resembled mine loudly like a thunder yelling out “EVERY SOUL SHALL TASTE DEATH””
and i said (goodbye)

Life teaches and i learn View All Posts